I have been trying to decide what compost unit to buy for the last several months. We don’t have tons of room in our backyard, and I wasn’t sure how big of a composter I should buy do to our large family. This past weekend I visited the Museum of Science and Industry’s Smart Home Exhibit (see: msichicago.org) and was amazed at this great kitchen countertop composter they had on display. When the tour guide said it takes 10 days to break down the compost and you can include meat, dairy, paper, and pet waste – I was sold!! Plus the unit looks nice, added bonus.
Checked out the website and it’s awesome! See: http://www.naturemill.com/video_histChan.html
or http://www.naturemill.com

I am feeling more and more confident that within the next year, we should be able to reduce our garbage (for a family of 6) to less than 1/4 of a 32 gallon can per week. So we could potentially go a whole month with only 1 can. At $3 per can for disposal, that is at least $100 garbage savings per year from our current spending. Not to mention the cost savings on not having to purchase top soil anymore!! Win Win…for my family and the planet.

If you get one let me know!! I’m interested to hear how much trash reduction people experience. This is cool for kids to witness as well. My son is stoked about recycling and composting.

Note: Sun Chips is expected to put out a compostable chip bag for next year. Excellent, eat chips then compost the bag. Much better plan than our current system. If you know of other companies doing biodegradable packaging, please post.

What Will Matter (by Michael Josephson) 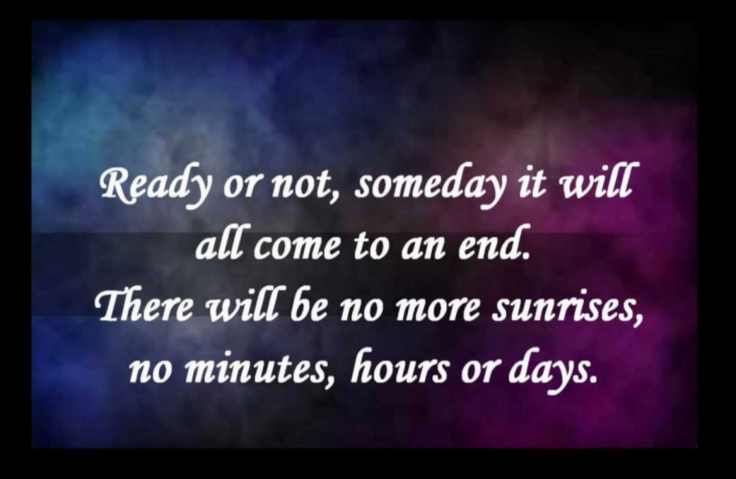 Ready or not, some day it will all come to an end.

There will be no more sunrises, no minutes, hours or days. All the things you collected, whether treasured or forgotten will pass to someone else.

Your wealth, fame and temporal power will shrivel to irrelevance. It will not matter what you owned or what you were owed.

Your grudges, resentments, frustrations and jealousies will finally disappear. So too, your hopes, ambitions, plans and to do lists will expire.

The wins and losses that once seemed so important will fade away.

was introduced to Colloidal Silver, four years ago when my son was an infant and kept getting an eye infection because his tear duct hadn’t opened yet. Instead of repeated antibiotic, my (traditional yet homeopath) doctor advised that I try Colloidal Silver drops for my son’s eyes. Wow…quick results. It worked great. So great, that my husband and I tried it whenever we had a stuffy nose, soar throat, or ear pain. After a while we used a little here and a little there anytime we noticed a sign of illness. It was amazing. Granted my son stayed at home and wasn’t exposed to lots and lots of germy kids on a daily basis, but overall we stayed quite healthy. He was only on antibiotics two or three times in his first 3 years of life. We use it like Airborne – a preventative antidote. For us, six misting sprays up to one tablespoon will usually do it (3x daily as needed). Our favorite brands are listed below.

The naysayers…I remember reading information about Colloidal Silver and argyria a skin condition where you turn blue. However, when I looked into this further it was amazing to me to find that Colloidal Silver was used for many many years as a cure all, and all the reports that I found on argyria were from people taking lots and lots of homemade CS on a daily basis. The amount people with argyria have taken is excessive compared to the amount recommended on the products I have used – a little goes a long way (see below a quick recap of the mere 11 cases that have been reported).

Even good things in excess aren’t good. I would not recommend you make vitamins, minerals, and supplements in your home (unless you really know what you’re doing). I would recommend that you purchase from a reputable vendor that has extensive research on their product and follows good safety and purity standards – then follow their dosage recommendations.

If you are interested in preventative medicine and alternatives to repeat antibiotics please read on find out more. If you find something interested – let me know.

So far, only eleven cases of argyria related to silver products have been reported and all seem to be from excessive use:
* A 56-year-old man who had sold and used colloidal silver for three years, developed blue/gray discoloration of his fingernails accompanied by a very high blood level of silver [1].
* A married couple who had three years of daily consumption of a drink prepared by administering an electrolytic charge to a bowl of water that contained a silver bar [2].
* Another couple had been taking a silver-containing “dietary supplement” prescribed by a naturopath [2].
* A mentally ill man who had been drinking silver-containing herbal tea for about 10 months [2].
* Stan Jones, Montana’s Libertarian Party candidate for the U.S. Senate, who reportedly started taking colloidal silver in 1999 for fear that Y2K disruptions might lead to a shortage of antibiotics. He made his own concoction by electrically two silver wires in a glass of water [3].
* Two men, ages 63 and 76, developed argyria after a year of product use inspired by Internet claims [4].
* A 16-year-old boy developed blue-gray pigmentation of his entire body after ingesting a silver-containing dietary supplement for a year. The product, packaged so that it was identical to bottled water. was touted as a preventive for everyday infections [5].
* A 58-year-old man who treated a presumed kidney infection with a home-brewed colloidal solution 12 times a day for 4 days developed argyria about 4 weeks later [6].
* A 38-year-old man developed argyria after ingesting approximately 16 ounces of 450 ppm colloidal silver three times a day for 10 months to treat his arthritis and other conditions. He made the solution with a simple battery-operated chamber that leached silver from pure silver wire. He had obtained the plans from information on the Internet [7]. The photograph to the right shows how his skin color compares to that of normal skin.
—————————-
Reference
1. Gulbranson SH and others. Argyria following the use of dietary supplements containing colloidal silver protein. Cutis 66:373-374, 2000.
2. Hori K and others. Believe it or not—Silver still poisons! Veterinary and Human Toxicology 44(5):291-292, 2002.
3. Blue Is the color of my candidate’s skin. Associated Press, Oct 2, 2002
4. Cohen LE and others. Effects of Internet quackery: Argyria in the silver state. Federal Practitioner 21(4):9-17, 2004.
5. Wickless SC, Schwader TA. Medical mystery—The answer. New England Journal of Medicine 52:2349-2350, 2004.
6. Brandt D. Argyia secondary to ingestion of homemade silver solition. Journal of the American Academy of Dermatology 53:S105-107, 2005.
7. Wadhera A, Fung M. Systemic argyria associated with ingestion of colloidal silver. Dermatology Online Journal 11(1):12, 2005.

Vita-Mix more than a Blender! Great for those with Allergies.

I purchased a Vita-Mixer at Sam’s Club a couple years ago and it was well worth every penny. The power of the motor and the tamper that allows you to push the items down makes it easy to place ice and flavoring in to make ice cream in minutes. I’ve broken other blenders trying to do this.

If you’re looking for a stylish version of the Vita-Mixer go to their website and purchase it online. All of the models sold in the warehouses are discounted but very plain looking.

Vita-Mix is a perfect kitchen companion. You can make up all kinds of recipes to accommodate your allergies.

I have many alternative recipes for allergy sufferers. If you are interested in more allergy resources, let me know.